Check or Checkmate ? It's Your Move. 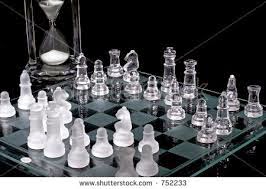 As he flipped over the hourglass to begin, his concern for time lost its focus.
Surely, there would be plenty of time to be successful. With lightning speed he completed the first few moves on the board & then stole a glance at the timer.  The sands appeared to have stopped - but how?
Surely there had to be more time to finish the game- to live more of his dreams- make his wrongs -right.
What had happen...what had he missed...
Maybe he would just start over.Time had stood still. Or had it?It was then that he noticed the sands of time had stopped.

He shook the timepiece with the hopes that the flow would continue...success. How much time had he lost? Could he recapture that time? What was played was played...there was no starting over...
for he had taken his turn & waited too long too make the most important decision of all.


The opponent...time.... had placed him in ‘check’. The pieces of the game were rearranged; awaiting his next decision. As he reconsidered, rationalized, & decided he had plenty of time to make that most significant move, the last granular of sand came to rest on the small mound. The reality became clear.
He was out of time...The game was over. His waiting had been his ultimate demise.

Before you reach the end of the time given you....please- decide.
It's your move...eternity waits...don't be left behind. Check-mate !